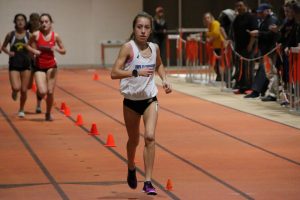 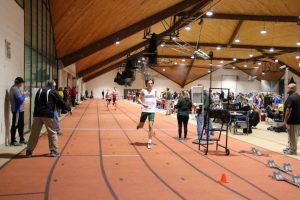 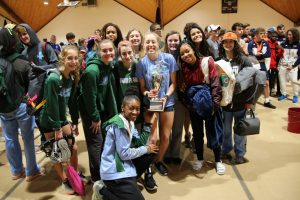 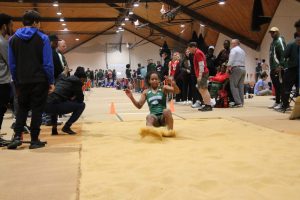 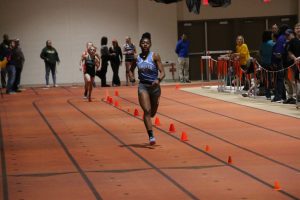 The Hanover girls’ indoor track team went into the Barbee Center at Woodberry Forest School on February 15 expecting to be in a close battle with Louisa County for the regional title, and that is exactly what happened.  In the end, the Lady Hawks came out on top by a close score of 132 to 127.5 over the Lions.

The Hawks were led by individual regional championships from Makenzie Joiner (500 meters, 300 meters), Alli Crytser (1600 meters, 1000 meters), and Jordan Harvey (Triple Jump).  The girls’ also acquired regional relay championships from the 4 x 400 meter relay team of Jordan Harvey, Sidney Chesley, Olivia Dumville, and Makenzie Joiner as well as the 4 x 800 meter relay team of Erika Osborn, Sidney Chesley, Kirsten McCarty, and Alli Crytser.  However, those were not the only highlights of the day.  Osborn, Chesley, and Harvey qualified for states in the 1000 meters, 500 meters, and 55 meter hurdles respectively, with all three placing third in those events. Sophie Vota scored a runner-up finish in the pole vault, with a clearance of 10 feet and six inches, and Khia Holloway finished third in the 300 meters.

As for the boys’ team, they placed a solid sixth out of 16 teams at the meet, with fellow Hanover school Lee-Davis taking home the boys’ team title. Cole Myers buoyed the boys’ effort, winning the regional championship in the 1600 meters and anchoring the boys 4 x 400 relay team that finished third to qualify for states. The other members of that team were Khalil Reid, Daniel Huggins, and Ethan Coleman. All in all, Saturday, February 15 was certainly a great day to be a Hawk!

The track team now looks ahead to the Class 4 State Championship meet on Monday, March 2 and Tuesday, March 3.  Here is the list of Hanover athletes who will be competing:

Congratulations to these athletes on a great season so far and best of luck at States!!