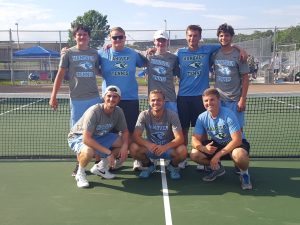 Congratulations to the Hanover High Boys Tennis Team for advancing to the state finals!  On Tuesday, June 5, the Hawks defeated Midlothian High School, 5-4.  Turner Cole, Ross Violi, and Charles Adams all won their singles match. The team of Ross and Turner, along with the team of Charles and Vance Woolard won their doubles matches to give Hanover the team victory. Hanover’s girls and boys tennis teams will both play in the state championship game at the Salem Center, 10 AM on Saturday, June 9th.  Go Hawks!