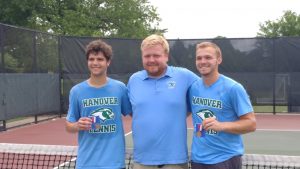 On Thursday, May 24, teammates Turner Cole and Ross Violi went head to head in the Region 4B singles championship match. Violi was up 5 games to 1 in the first set, however, Cole fought back and ended up winning 7-6 in a tie breaker. He then went on to take the second set 6-2, capturing the regional title. He will go on to play at Roanoke College on June 7 in the class 4 singles state tournament.

The pair also competed in the Region 4B doubles tournament on Tuesday, May 29. They dominated their way through each round, defeating Courtland, Dinwiddie, and then Eastern View in the championship match. They didn’t drop a single game through three matches, winning 36 straight games to capture the regional title. 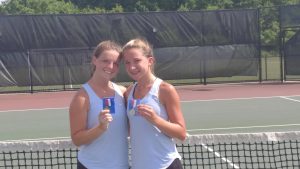 Madison Moore and Raine Weis were also the Region Champions in doubles.  They will join Turner Cole and Ross Violi at Roanoke College for the class 4 doubles state tournament on June 8. Good luck to all of our Hawks!