Congratulations to long time Hanover Physical Education teacher and former Hawks wrestling coach, Aaron Bradley. Coach Bradley joined the Longwood Athletics Hall of Fame in the class of 2018. Bradley is the second wrestler ever to join the group. He posted a career record of 55-9 as a Lancer and finished eighth at the 2001 Division II national tournament becoming the first All-American in Longwood wrestling history. He began his wrestling career at Lee Davis High School, where he won back to back state championships in 1995 and 1996. As a coach at Hanover, Bradley has led the Hawks to a Virginia state championship in 2014 and four regional titles. During his 2014 campaign, he received district and region coach of the year and also earned Virginia coach of the year from the National Wrestling Hall of Fame. Congratulations to Coach Bradley and all of his accomplishments, we’re proud to call him a Hawk! 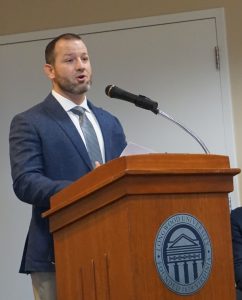