On Friday night, the Hanover High baseball team finished a week of amazing baseball with a 4-3 victory over Great Bridge to win the 4A East Regional Championship. After a 13 inning semi-final game that was won with a walk-off run, it would be hard to believe that the finals would be more exciting, but it was. Great Bridge scored in the top of the seventh to even the game at 2-2. Hanover could not answer and the game went into extra innings.

Great Bridge came out swinging and loaded the bases in the top of the eighth. Great Bridge took a one run lead into the bottom of the eighth when Jack Chenault took the plate. Jack reached first on a single. Brian Sisson bunted on the next play but Great Bridge mishandled the bunt and Jack went to third and Brian reached first. Jack Dragum sent a high pop up into center field that was dropped and Jack Chenault scored to tie the game. Michael Warley then bunted to move Brian to third and JD to second. Michael was out and Great Bridge elected to walk Cam Grimes to load the bases. With bases loaded and one out, senior Josh Plummer in his last at bat at home sent a shot into right to send in fellow senior, Brian Sisson to win the game. Brian had scored earlier in the game and had an RBI. Brian also was the winning run in the semi-final game.

The Hawks have played 21 innings over three days. This title was hard fought as both Great Bridge and Jamestown played great games. The pitchers will have a week to rest as Hanover has advanced to the state tournament and will play next Friday in Salem. The Hawks will play Harrisonburg in the second game of the day as Great Bridge will play Liberty Christian in the first state semi-final game. Congratulations to the team, players, managers, and coaches! 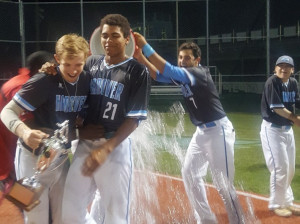